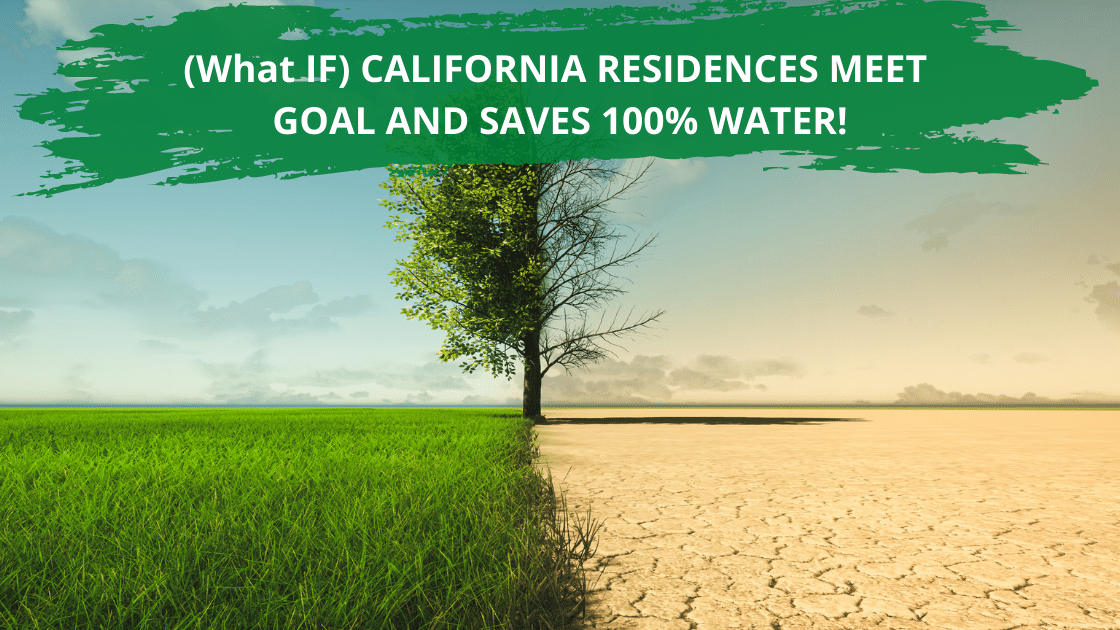 When singer-songwriter David Gates of the band Bread wrote “IF” in 1971 it became a thought provoking message of contemplation.  The lyrics, “If a picture paints a thousand words then why can’t I paint you?”  Makes you wonder if you’re a painter or if you should stick to graffiti, doesn’t it?  Throughout the years there’s many other “IF” questions that boggle the mind:  What IF every time you tried to use your smartphone, it took an unflattering selfie and sent it to all your contacts?  Or, what IF you could live forever?  How about the biggy: What IF southern California residences save 100% of the water they’re being egged on to do so?

It’s a 7-letter dirty word even though cool clear water is the subject of it.  I’m a big fan of the saying “Liars don’t figure and figures don’t lie” so when research shows that California water usage roughly breaks down as follows: 48% Environment (which a huge portion can be diverted for us),  41% for Agriculture and 11% Urban/Residence (only 4% of the 11%  is used in the landscape) the concern comes in as to why water agencies are pressuring us so hard to conserve that 4%  when in reality there’s nothing we can do collectively to make a dent in the drought by not watering our landscape.  Today we ask “What IF California residences meet the goal of 100% water savings.” 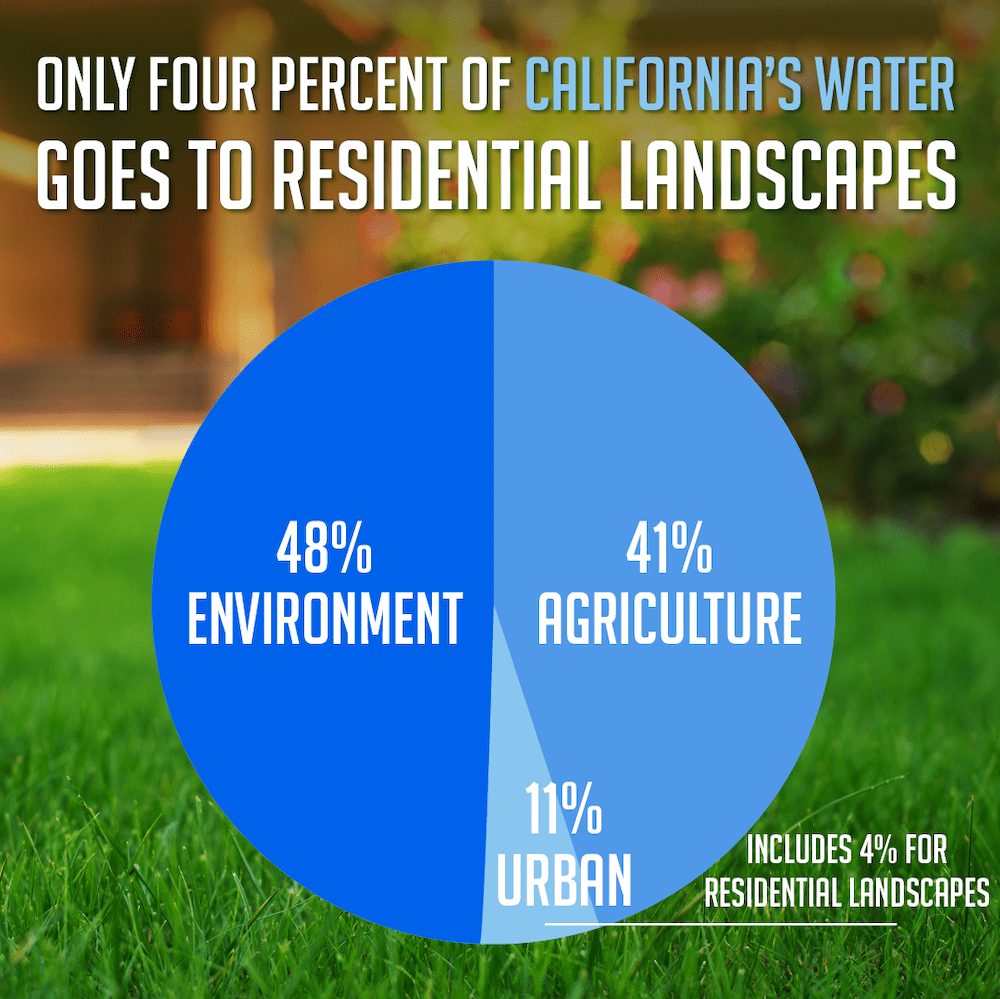 Chances are you’re a law-abiding, tax-paying, keeping your nose clean kind of person wanting no trouble and simply wish to enjoy all that southern California has to offer from the coast, desert, mountains and everything in between.  It’s the only place you can go surfing in some of the most perfect waves on this planet in the morning then hit the slopes for some evening snowboarding.  So when ‘The Water Man’ tells us we’re in the worst drought in history we are forced to make sense out of the rhetoric and it’s a compelling story.  But that’s all it is, a story.  So, let’s put on our pretend hat and throw out the scientific facts and just do what ‘The Water Man’ wants us to do:  rip out our lawns, stop watering our plants, install fake grass, boulders and inorganic mulch.  By doing so we’ve saved 4%, oh let’s be generous we’ve saved 6% of every drop of water of the 11% of our total residential usage.  ‘The Water Man’ gives us the impression IF we do this we’d be out of woods and water will flow freely.  But, the birds aren’t chirping because soil is dying, global warming is closer since temperatures are now rising as there isn’t turf and plants to cool us down.  The heat index has risen tremendously because fake turf actually can get hotter than asphalt.  Southern California has turned into a dustbowl reminiscent of Arizona, Nevada, New Mexico and Texas all rolled up in one. One giant step backwards in mankind.

On November 4, 2014 YOU voted for Water Bond Proposition 1.  Here is a progress update:

*From the LEGISLATIVE ANALYST’S OFFICE, February 2, 2016

Note:  On As of to date (nearly 8 years later), zero money has been spent for water storage projects.  Now, tear out your lawn, stop watering and pay more for your water. 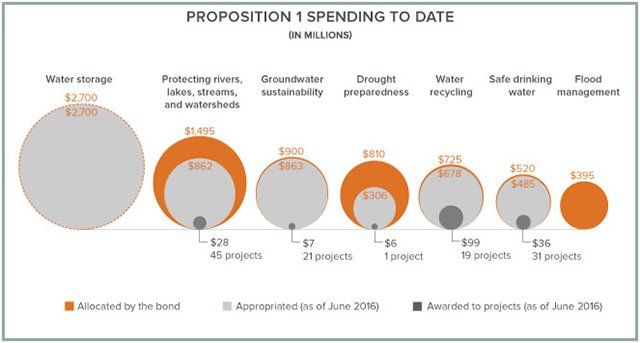 The What IF Repercussions

‘What IF’ we’ve done our part of meeting the goal of 100% water savings?   ClORPT is the process of soil formation.  It stands for climate, organisms, relief, parent material and time.  It takes millions of years for a rock to become soil which is loaded with oodles of living organisms like microbes and insects which help aid and maintain soil formation.    Fast forward to today and ‘The Water Man’ has forced us to kill the soil our fathers, grandfathers and generations of family have worked to become fertile.  Without water soil will die.  In turn, it’ll heat up the environment making it unbearable for you and your pets to live.  Will we become confined to inside our homes?

Turf is the number one workhouse in carbon footprint management followed by trees, shrubs, ground cover and our overall landscape.  ‘The Water Man’ recommends landscapes of cacti, rocks, inorganic material and fake turf which doesn’t have natures backing in supporting a green footprint.  Close your eyes for a moment and think of the desert.  Under a microscope there’s some life but it’s not sustainable for our needs.  It doesn’t cool our environment.  It doesn’t clean pollution.  It doesn’t offer us vast amounts of oxygen. We need things green to live.  Water is a key component for that. What IF they take water away from us?

The What IF Strategy and Does it Work.

Ask yourself if you really believe that our voice is being heard.  We just learned that billions of our tax dollars have not been used over the last 10 years to build water holding facilities. In fact, dams in Northern California are slated to be torn down and recently a desalination plant was voted out in Huntington Beach by a group of people that aren’t water experts.  Now that we’ve done our part, where does it stop?

What if your soil dries up?

Dr. Robert Thompson of the University of Reading’s Department of Meteorology conducted an intriguing experiment to see how long it takes for a cup of water to soak into wet grass, normal summer grass, and parched ground.  The study demonstrates why heavy rainfall following a drought can be extremely dangerous and result in flash flooding. Who’s going to be responsible for the damage?

To add insult to injury the U.S. House of Representatives passed the Inflation Reduction Act of 2022, a multibillion-dollar package, on Aug. 12 tackling issues from climate change to health care costs, where $4 billion would go toward relief efforts in the Western U.S.  Drought funds allocated by H.R. 5376 would target urban and agricultural water efficiency projects, such as replacing lawns with drought-resilient landscaping… along with other efforts according to a press release from California.  By now you should be asking yourself why isn’t money that’s already been allocated for capturing water being focused on but instead new money to be used for a push on ‘replacing lawns with drought-resilient landscaping.’  For the record I’ve been in this business since 1976 and have never heard of a drought-resilient landscape.

The BIG What IF – Lower Water Bills.

You would think that the incentive for eliminating outside water we’d see a monthly incentive.  During the last drought ‘The Water Man’ increased water rates siting that we used less water, therefore an increase was necessary.  So we get penalized for using less water.  Hmmm…..  History does repeat itself as ‘The Water Man’ has the nerve to ask for another raise.  Is it any surprise?

Fun Fact:  Grass opens up soil pores to store carbon from keeping it from the atmosphere.

The bottom line is the “What IF California residences meet the goal of 100% water savings” is a cute idea but to the detriment of soil life and ours.