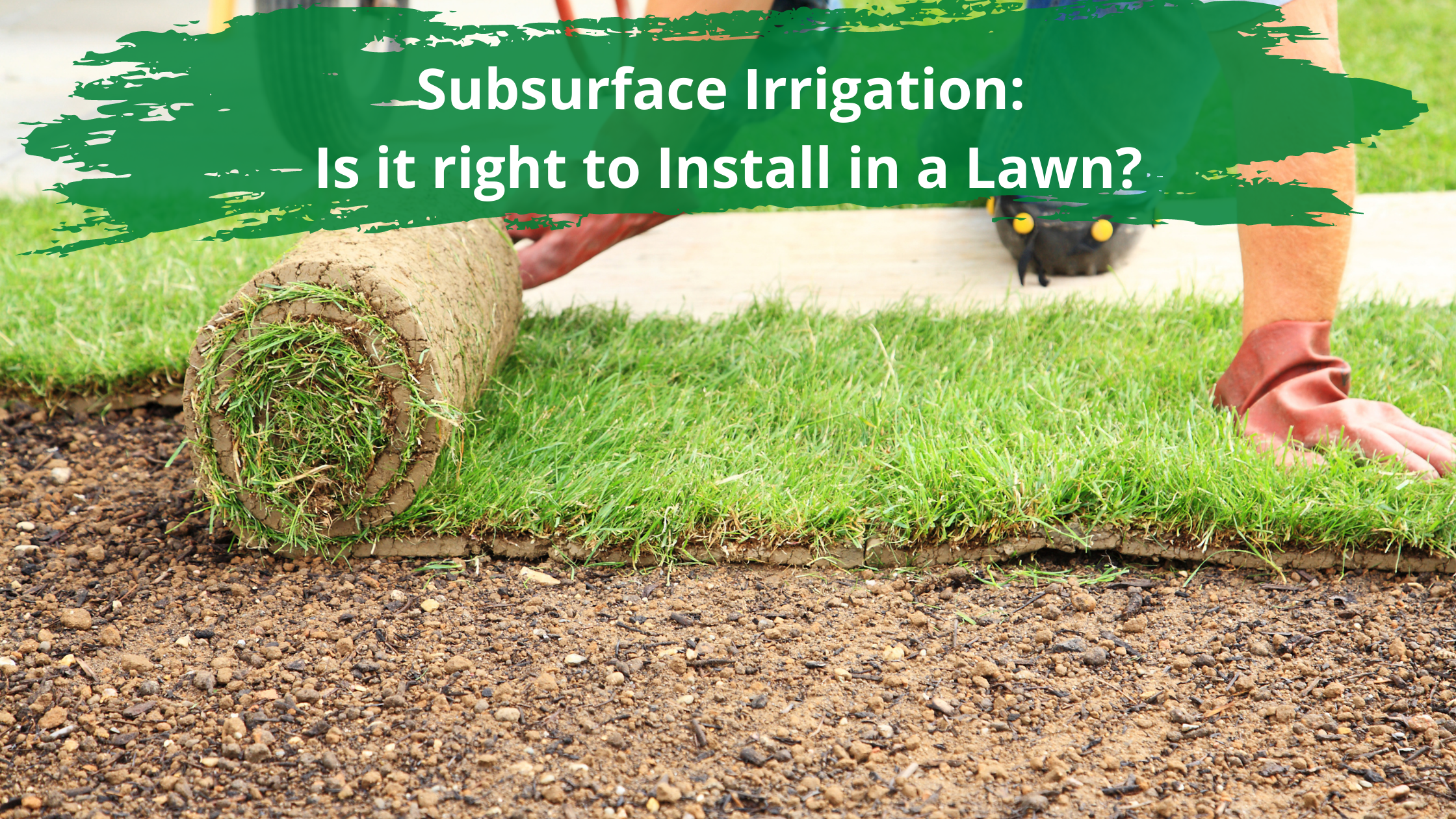 Subsurface Irrigation: Is it right to Install in a Lawn?

July 19, 2021
Martin
Blog
No Comments on Subsurface Irrigation: Is it right to Install in a Lawn?

The naked eye can’t see the influence agriculture (Ag) has on consumer horticulture.  Chances are if it’s in your landscape it was initially tested, to one degree or another, in Ag.  The most popular of which are fertilizers and irrigation.  Then ‘they’ make the decision to see if the consumer is attracted to it.  Sometimes it’s a big hit, sometimes it’s a huge miss.  Subsurface irrigation for lawns is one of those elements that the professional landscaper and homeowner consumer needs to decide on.

How would you like not to worry about getting your newly washed car sprayed by sprinklers, fix broken irrigation heads, unclog sprinkler inserts, or have water runoff?  The landscape can have its challenges but what if there’s a miraculous cutting edge way to water the lawn and have a lower water bill?  Subsurface (drip) irrigation might be what you’re looking for.

Let’s get this straight; subsurface irrigation is a form of drip irrigation only buried in the ground.  It mimics an irrigation process used in Ag which was adopted by the homeowner for planter beds.  You’ve seen the type with black spaghetti tubing with some sort of drip or spray head attached to the end seated next to a plant connected to larger black tubing.  Subsurface irrigation is a lot neater looking as all the major pipes are buried. 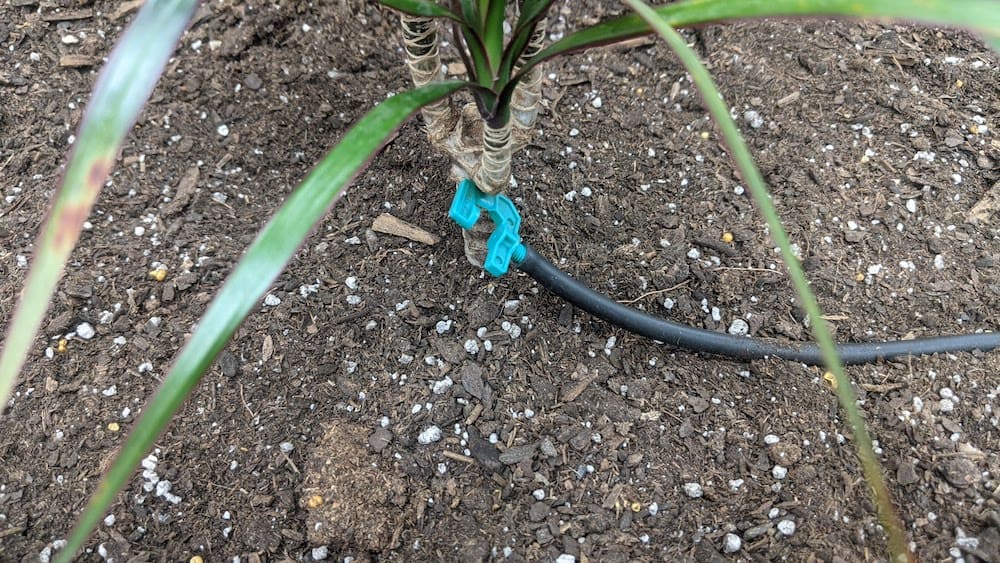 Let’s explore what some of the components are for subsurface irrigation:

Subsurface Pipe.  Unlike a planter dripline, subsurface lawn irrigation doesn’t have spaghetti tubing.  Instead, they just use ½” – ¾” flex tubing or pipe.  The emitters, where the water oozes out, are built right into the pipe at a predetermined spacing from 4” to upwards of 24”.  The emitter spacing you use in your yard depends on soil types, soil tension, and depth of pipe on installation. 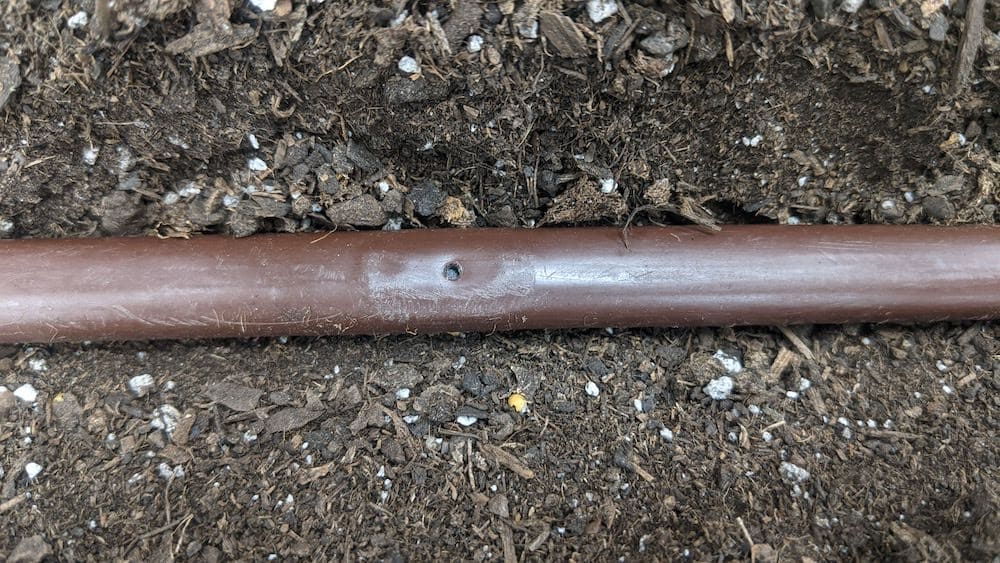 Pressure Reduce Regulator.   Water pressure can range from 30 pounds per square inch (psi) to upwards of 70psi or more for a consumer line.  If you were to install a dripline with that kind of pressure you’d blow it up!  Between the main feed and the irrigation line you need to reduce the pressure with a regulator valve that you can manually set usually between 8-15psi.  You won’t know until you test the system.

Fertilizer Injector.   For large yards, a fertilizer injector will be needed to feed the turf, aka fertigation, as a granular fertilizer needs to be watered in from the top.  Depending on the type of fertilizer you use, water-soluble or liquid, will determine the type and size of the injector.   Not all liquid fertilizers are created equal.  Organic fertilizers such as fish emulsion and hydrolysates can clog up the injector system of the buried emitters. You need to find one specifically designed for specifically for subsurface irrigation.

Smaller yards, on the other hand,  an injector could be cost-prohibitive.  A simpler method would be to apply a granular fertilizer and then “flood” the turf to dissolve the fertilizer.  This will require a fertilizer that dissolves quickly with nitrate; like Marathons 24.2.4.

(A Quick Lesson on Fertilizing)  Nitrogen is available in three forms; urea, ammoniacal, and nitrate. Nitrate nitrogen is available to the plant immediately and will green the lawn much more quickly than other forms of nitrogen. Only nitrate form nitrogen is useable by the lawn. Urea form and ammonia form nitrogen must first be broken down in the soil to the nitrate form before the lawn can use it. As a result, some fertilizers are faster acting than others, even with the same amount of total nitrogen. Marathon All Season Fertilizer is a fast acting lawn food because it has a high percentage of nitrate in the formulation.

Filter and Flushing.  Did you know your water is filthy?  It carries minute rocks, debris, and insects that can’t be seen by the naked eye.  A filter needs to be installed after the pressure regulator and before the fertigation system to catch those particles, along with calcium deposits, so they don’t clog up the system.  A filter is also needed to sift out fertilizer particulates.  The mesh screens in the filters must be cleaned regularly.  In addition, an irrigation cleanout will need to be installed.  Typically flushing the system is done once a month.

PVC Pipe and Fittings.  Connectors, fittings, pipes, and glue are typical in any irrigation system so this shouldn’t come as a surprise.  An important thing to remember is to make sure your dripline and PVC fittings are compatible so it can be bonded by with the proper glue.

Soil Prep.  There’s a saying amongst seasoned pro’s “dig a hundred dollar hole for a ten dollar plant.”  In other words, soil prep is key for a successful plant and even though we seem to forget, the grass is a plant.  Unlike a container plant that can be dug up and moved turf is something we normally don’t do that to.  Once it’s down, it’s down!  Therefore, soil prep for a subsurface irrigation system is downright scientific due to the changes in soil structure.  Soil texture can’t waiver at all.  It must be the same here, there, and everywhere.  If not, water won’t evenly permeate through the soil and you’ll be fighting wet, dry and uneven turf.  Typically, a professional subsurface irrigation installer will know how to properly blend the soil.  But, don’t be surprised if the recommendation of 4”-6” soil replacement isn’t made.  When done properly your water savings can be as much as 70%!

Installation Basics.  Whether it’s a new or existing installation precision is needed.  Following manufactures guidelines you’ll need to calculate water volume and pressure per line based on the number of emitters per lineal inch, spacing of each line, and soil percolation rate per valve.  Laying out the line must be straight and spaced accordingly.  “Careful planning and precise install practices are absolutely key to success in irrigating turf with subsurface drip” says a subsurface irrigation pro that’s been doing installs for years.

Once the system has been installed test it out before installing new sod or seed.  Time is how long it takes for the whole area to get evenly moist.  If you have pepperoni pizza circles of wet soil and they don’t overlap you’ll have to adjust it.  Don’t eyeball this process and use a moisture meter for accurate measuring. 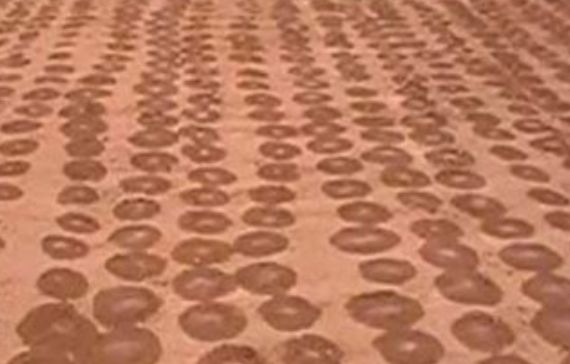 When you’re 100% confident the system is working then plant away!

Maintenance.  Subsurface irrigation is best maintained by an expert that understands how it all works.  A ‘typical’ gardener or homeowner doesn’t have the knowledge to use the correct chemicals to kill off roots that have ventured into the emitters plus clean out mold and calcium deposits including flushing the system.

In Ag, subsurface irrigation has proven some attractive benefits that bleed over to lawn irrigation: water-efficient when properly installed (upwards of 70% savings), no runoff on walks, driveways, and gutters, no sprinkler heads to trip over, less insect activity, and a life of 15-25 years – to name a few.

Leaps and bounds are being taken by subsurface manufacturers in their research and development to create an irrigation system that’s friendly for you, your family, and the environment.  Remember, it’s our duty to be good water stewards.